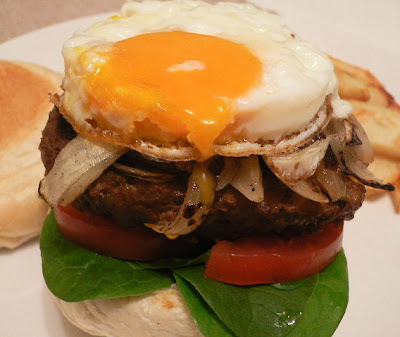 A movie that inspired me when I was a kid was Rocky I. Seriously. Yes, I'm female, I don't have a drop of Italian in my blood, I am not an aspiring boxer and I was 2 years old when it was released. I probably first saw it when I was 9 or 10 years old because my dad loved Rocky movies. Somehow, the Italian Stallion left a strong impression on me. I loved the movie so much that I even named my pet turtle Rocky. The movie was filmed in just 28 days and with only a budget of US$1.2 million but yet it became such a popular movie (it got 10 Academy Award nominations and won 3 Oscars, including Best Picture) and launched Sylvester Stallone's career.
It was more than the whole "underdog wins the day" story line that inspired me. There were several scenes that left an impression. The scene that I stuck in my mind most clearly was when Rocky finally got fit and ran up the steps to the museum at the end of his run with his arms raise and fists thrusting in the air, in a victory pose. Due to my love for running, I could relate to that scene very much and I have to admit that I've actually done that before after running up a big hill (when no one was looking, of course!). I even have the Rocky soundtrack ("Gonna Fly Now") as running music (o.k., laugh if you want, I don't mind). Another scene that I could relate to was when he had to wake up before dawn to run. He also cracked I-don't-know-how-many eggs in a glass and drank the raw eggs in a few gulps! I guess those were the days before protein shakes. And how can anyone forget how Rocky trained by punching the hanging cow carcass in the meat cold room? 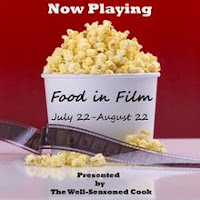 Why am I going on about Rocky? This is my my entry to the Food in Film blogging event hosted by Susan at The Well-Seasoned Cook. The most memorable food scenes in Rocky was the raw egg scene I mentioned. I didn't think all of you will enjoy a a recipe for a cocktail of raw eggs. So that's when I thought of making a Rocky Burger. Basically what makes it a Rocky Burger to me is that it has to be kept unpretencious, wholesome and high in protein. Quikong helped me with this project (he is the expert when it comes to meat). We made a thick, good quality beef mince patty and marinated it. Of course the cooked patty has to be topped off with a runny egg. Instead of lettuce, I used fresh spinach (Popeye's secret weapon!) and all the other usual burger accompaniments such as sliced tomatoes and grilled onions. 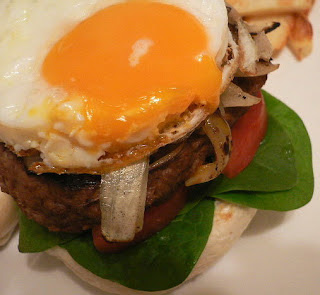 Do check out the terrific entries in the The Food in Film round-up which is now available here.
Posted by Nora B. at 7:01 am

What a great choice. I could totally see Rocky tucking into this. The raw eggs scene always makes me feel queasy.

This sounds like such a fun event. I'm sorry I missed it.

My family is a huge fan of Rocky. Great looking burger and I love the story!

Nora,
My dad loves Rocky, too. And we used to watch it together when I was little - I loved it!
One thing that I kept asking my dad is why Rocky would let his brother in law be such a pain in the neck. And my father used to tell me that Rocky felt sorry for him. I didn't like the guy. :)

That burger is huge!

Now this is a burger! Enough good things cannot be said about it. I love all the Rocky movies too :)

I don't like Rocky the movie but I LOVEEEEE your rocky burger. I like burgers with a runny egg, and don't care about being messy with it. Awesome.

That looks fantastic - but I think I'd have to tackle it with a knife and fork...or a pile of paper napkins to catch the drips...
I love runny eggs...

That is one powerful burger!

KJ - Thanks. I had to squueze my brain when I was trying to come up with something meaningful to me, yet fun. It's not too late to join in, Susan will accept late entries.

Veron & Katiez - It was very juicy and I actually couldn't bite into it because it was waaay too big. I actually had to eat it ith a knife and fork :-)

Kelly M, Patricia & Cynthia - Thank you. Glad to hear that there are lots of people who also love Rocky. We have all the Rocky DVDs (except the latest one) and still watch it from time to time.

Tigerfish - Thanks! Yes, it did get messy. LOL!

Nora, this is a very cool entry and a great film to have reviewed. Well done! I want to watch it again NOW! Having taken up running recently myself (though nowhere near as accomplished as you) I am thinking that the soundtrack must be quite inspiring to listen too.

There are only rare occasions when I miss meat. This is one of them. Fabulous work!

Haven't seen the movie, but I pretty much love anything topped with an egg and this is no exception. It looks so good!

Wow. That is a good looking burger. D doesn't often demand food but I suspect he will demand this when he sees it!

Wow! How fabulous is that. Love the fact you used spinach.

An awesome burger! and a really fun event too.

Oh, I know what you mean! After seeing that movie, I donned a hooded sweatshirt and went running out of the house in search of a massive flight of stairs. I think I ended up settling on the stairs in our basement. ;)

He would love this burger, and my husband would too after a killer workout!

Lucy - Thank you. You are too kind! Running is a lot of run, I hope that you'll continue to enjoy it.

East Meets West Kicthen - Thank you amd thanks for dropping by.

Aimée - The egg definitely adds something special to the burger.

Wendy - Thank you. I think D will enjoy it since this burger was constructed under supervision of Quikong. ;-)

Margaret - Thanks! I like spinach in my burger and sandwiches.

Kelly-Jane - Thanks. Yes, it was fun to play along.

Hi Susan, it's nice to know that I was not the only one who did that!

Like I was saying to Wendy, since this burger was constructed under supervision of a man, that's why I know it will appeal the male appetite. :-)

Thanks again for hosting this event - I had fun writing up this post and Quikong enjoyed eating the burger.

And your burger looks great. I haven't eaten burgers for ages. Now I am craving for one!

Totally irresistible, I must say!!
Gosh, I wish I could bite in it!

Hi, Nora. Following up to my email to you, with great thanks for participating in this event. I can't tell you how popular the Rocky movies have been in the States, but your entry will give us more reasons to hit the treadmill. That burger looks like it has 5000 delicious calories in it! Should have the round-up posted by Tuesday next.

A perfect entry into the roundup Nora!!! Stallone would be proud!!!! By the way I have nominated you for a "Droolworthy Blogger" award if you would care to check out my blog sometime and accept...or pass it along.

Anh - Thanks! I also don't usually eat beef patty burgers because I don't know what teh quality of the mince is, but i do like homemade burgers.

Valentina - Thank you. The egg really made the burger extra juicy.

Hi Susan - I realise now that there are heaps of people out there who also like Rocky movies. :-) Looking forward to the round-up.

Valli - Thank you so much for the award!!! I left a comment on your blog. I will pass it on eventually :-)

Oh my! You really know the way to this girl's heart! Fantastic entry and just the sort of thing I'd love to eat.

oh wow! that is one impressive burger! how do you get your jaws around that!

What a great entry for the Food in Film event! It looks absolutely delicious.

Thanks Truffle. I don't usually make burgers and I really enjoyed this.

Thanks Elly. I tried to leave a comment on your vox blog but I'm not a member. Your asparagus entry was a terrific one. 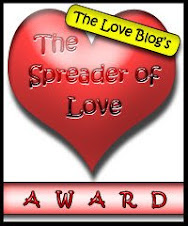